To answer that question requires navigating a minefield of political considerations. But it shouldn’t have to be that way. As any country proud 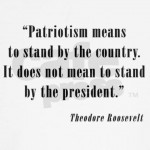 In order to have any immigration policy serve any purpose, the border must first be secured. Otherwise American immigration policy exists only on paper, and is mocked by what happens on the ground, as masses of people cross the border illegally, in disregard of whatever policies are embodied in our laws.

Moreover, all the people who cross the border from Mexico are not Mexican. They can easily include Middle East terrorists. The fact that this obvious threat has been blithely ignored for years, in order to get political leverage for “comprehensive” immigration reform, suggests that importing more potential voters for the Democrats has a higher priority in some quarters than safeguarding the country.

“Comprehensive” immigration reform — as distinguished from securing the border before doing anything else — serves the interests of politicians of both parties.

A “comprehensive” immigration bill means that they can vote for something that mollifies those Americans who are concerned about the uncontrolled influx of foreigners, while winning support from those who want more foreigners admitted and made citizens. Starting the amnesty track immediately, while promising border security in the future, means that an irreversible benefit is conferred up front, while only time will tell whether the promise of border security will be kept — as it has not been thus far.

Ask yourself why people who have been living illegally in this country for years cannot wait a couple of more years until the border is secured before the question of their legal status can be studied and debated in Congress and among the public at large.

Ask yourself why the American people must continue to be played for suckers by such games as letting foreign pregnant women drop in to have their babies here, who automatically become American citizens, opening the door for other members of their families to come in later. These are called “anchor babies.”

Crossing the border from Mexico is by no means the only way such women unilaterally confer American citizenship on their children.

There are profitable organized programs to bring in affluent pregnant women from overseas to live in little communities set up for them before and after the birth of their anchor babies. The principle that anyone born on American soil was automatically an American citizen made sense in centuries past, when getting here across an ocean in ships was very different from booking a round trip flight from Shanghai or Manila, much less walking across the border from Tijuana.

If nothing else, putting a legal end to the “anchor baby” racket might suggest to the American public that they were regarded in Congress as something more than expendable suckers who can be mollified with rhetoric.

Waiting until the border has already been secured before an immigration policy is decided upon would also allow time to discuss the pros and cons of various ways of enforcing whatever that policy might turn out to be. But many politicians much prefer to rush complex legislation through Congress before the public knows what is in it or what is at stake. “We the people” are to be by-passed.

Time to deliberate would also be time to raise questions as to why local government officials in “sanctuary” cities who openly thwart or defy federal immigration laws should be allowed to get away with such illegal acts, while private employers are forced to become enforcers of such laws, under heavy penalties for not investigating the legal status of those they hire.

Government officials at all levels take an oath to uphold the laws, but somebody who owns a restaurant or hardware store has not applied for the job of border enforcement — and the 13th Amendment forbids involuntary servitude. Or are we already too far along on the road to serfdom for that to matter any more?