Terrorist leader Oumar Ould Hamaha is running his “Movement for Unity and Jihad” in West Africa. “Unity” in the minds of these Islamist radical, bigoted, if not racist Muslims, means getting rid of non-believers.

I told my elements that we need to get rid of these people because they are refusing to respect us.

The extremists have since made “huge gains,” taking the entire northern half of Mali, including Timbuktu, and causing some 440,000 people to flee, according to the useless United Nations. 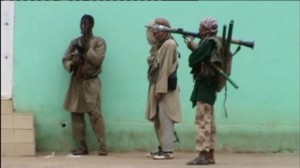 Respect them, convert to their version of Islam, or die. That’s what this whole ‘movement’ is about. And their soul brothers in this ‘movement’ is a world-wide group called the Muslim Brotherhood. The group that the Obama administration said was a harmless, “largely secular” group when they helped them take over Egypt.

The term “racist” has really been abused in today’s political vernacular. If you’re a racist, you believe that races other than yours are inferior by genetics. If you’re a bigot, you just don’t like them because of who they are, or the color of their skin. Not that one is genetically superior to others.

At the risk of bastardizing the word ‘racist,’ there is a similarity to be drawn between this whole Islamic Jihad movement and racism. These Islamists, Muslims, actually believe that anyone of any color that does not accept their religion, and embrace their religion instead of their own, just need to be gotten rid of. If there was such a thing as a “religious racist,” that’s exactly what they would be.

They simply do not accept the existence of what they call ‘non-believers.’ For these terrorists, non-believers are a to-do list. There’s no ‘live and let live’ in their perverted religion. It’s you comply. You submit. Or you die.