The Americans for Fair Taxation (AFFT) issued this press release (below). Aside from the economic stimulus that the FairTax would provide all on its own, without special government subsidies or more deficit spending, the revenue stream coming into the federal government is more stable than under the current abortion of the IRS tax code.

The IRS depends on your payroll taxes to fund the federal government. The more people find themselves out of work, the tax base shrinks further, the less revenue the government gets and the more debt the government acquires, adding to the burden of current and future generations of Americans.

By contrast, when all the federal tax categories you pay are eliminated and replaced with the progressive consumption-based FairTax, that revenue stream to the federal government is not exclusively tied to employment. The result is the largest tax base humanly possible and a more stable income stream.

When you hear, like you may have heard yesterday, that consumer spending increased ‘more than expected’ (by a laughable one half of one percent) you should also understand that it translates to increased revenue to the federal government. When the tax burden is spread out over everyone instead of to only those who are lucky enough to still have a job, we reach the fairness that the administration claims they want without penalizing the people who have the ability to create jobs.

Special note to FairTax supporters in the Florida Panhandle. I have a quantity of 4ft. by 8ft. FairTax signs that are FREE to anyone who has a good location (high-traffic area) to display them. Let me know if you want one. This is what it looks like. 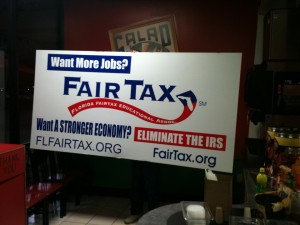 Americans Frustrated Watching Tax Policymakers Play “Ground Hog Day”
Washington, DC – Americans for Fair Taxation (AFFT) released today revenue
estimates that the FairTax, a national sales tax, would have collected far more
federal revenue in 2009 and 2010 than the current income tax based system.
The estimates demonstrate that FairTax-generated revenues for 2009 would have been $171 billion more than the IRS revenue and in 2010; the FairTax would have generated $267 billion more.

AFFT provided the data to the Joint Select Committee on Deficit Reduction or
Super Committee recently and is releasing it to the public today.

“ Watching Washington tax policymakers churn a few well-worn and ineffective
ideas to come up with the same disappointing results is like watching the movie
‘Ground Hog Day’, except this is real life not a movie” said AFFT Chairman and
Co-Founder Leo E. Linbeck, Jr.

“No wonder the American people are so frustrated! Some in Washington want to
adjust and tinker with the current sclerotic system but working Americans are
ready to throttle it and them and start fresh. The time for reform is over. We need to be seeking replacement.

“The FairTax is a hybrid within the range of consumption tax alternatives— more
transparent, simpler and it returns the power to determine how much tax is paid to the American people.

“We believe it addresses the nearly $1.5 trillion in deficit reduction the
congressional deficit committee is charged with making, and responds to the nearly $4 trillion in cuts offered by Democrats and other partisan issues.

The FairTax projections are based on a 23 percent tax inclusive rate of taxation as proscribed in the Fair Tax legislation (HR 25/S 13).

The estimates were provided by David Tuerck, Chairman of the Economics
Department and Executive Director of the Beacon Hill Institute at Suffolk
University in Boston.

“Because revenues from a consumption tax are always more stable over the
business cycle than revenues from an income tax, it stands to reason that the
FairTax would have reduced the deficit in recent years, had it been in place,” said
Tuerck.

Formed in 1995, AFFT is a nonprofit, nonpartisan, grassroots organization
dedicated to replacing the current tax system with a progressive national retail
sales tax.