In case you had any doubt about the synergy between BIG LABOR and anarchists here and around the world, this should remove any doubt.

AFL-CIO President Richard Trumka was in Minneapolis today for the ‘Next Up Young Workers Summit.’  This is the group of ‘young workers’ and activists and students that just announced their strong support of the Occupy Wall Street protesters:

The world in which we live isn’t working for the vast majority of people. The top 1 percent controls the economy, makes profits at the expense of working people, and dominates the political debate. Wall Street symbolizes this simple truth: a small group of people have the lives and livelihoods of working Americans in their hands.

Their perspective of just who works for who is instructive in just how counter-productive this labor movement is to America, and other

Then there’s the global labor movement that Trumpka is talking about. 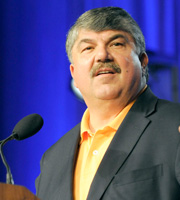 “America needs a good dose of critical imagination right about now. We need ideas and energy. We need enthusiasm, optimism, that sense that everything is possible. . . . You are the future of this movement, and all of us—all of America’s working people—need and your critical imagination in a big way.”

success. Instead, he is pushing for labor union membership growth. And if it means tearing the country down first, like our President and Trumka prefer, then they will surely do it. Or rather, continue to do it. Be imaginative, critically imaginative, he says.