What represents a big win for everyone’s first amendment right, the FCC once and for all struck the Fairness Doctrine from law.

“The elimination of the obsolete Fairness Doctrine regulations will remove an unnecessary distraction. As I have said, striking this from our books ensures there can be no mistake that what has long been a dead letter remains dead,” Genachowski said in a statement on the FCC website.

But that’s not all. The move to cut it was part of President Obama’s efforts to lift the burden on businesses from useless and costly government regulations.

FCC Chairman Julius Genachowski said that the decision to eliminate the Fairness Doctrine was part of a larger mandate proposed by the Obama administration to ease regulatory burdens by getting rid of duplicative or outdated measures.

What’s amazing here is that candidate Obama was all about the Fairness Doctrine, albeit under the disguise of another name. He calls it media-ownership caps and network neutrality. And the Soros think tanks came up with the back-door Fairness Doctrine. A plan ‘B’ if you will. I wouldn’t expect that this decision will stop their efforts to destroy conservative talk radio. They’re not going away.

So the legal aspects of the Fairness Doctrine are wiped from the books. Which puts the focus on the President to come up with a Fairness Doctrine by fiat (like he is trying to do with amnesty for illegal aliens). The Progressives are not going to like this decision. Especially since it is being called an ‘outdated’ measure.

New congressional estimates say the trust fund that supports Social Security disability will run out of money by 2017, leaving the program unable to pay full benefits, unless Congress acts. About two decades later, Social Security’s much larger retirement fund is projected to run dry as well.

Update 8/19/2011: President Obama hits the campaign trail today in his two new multi-million dollar busses we bought him. The White House “explanation” is that they are on official business, not a political campaign.

Curious thing about President Obama’s campaign kick-off. If his first day on the campaign trail isn’t important enough to cover live, it begs the question “why is that? Ordinarily, the President is on every major TV network and most of cable. Could it be because he is not drawing crowds? Maybe it is because visiting states and localities where unemployment is low, and predominately white, would not set well with the  Congressional Black Caucus? Or both.

The big news of Obama’s new re-election campaign that is not being reported is that he is out of ideas. Not only is he out of ideas, but he is not taking any responsibility for the malaise we are seeing today in this, Jimmy Carter’s “second term.” Instead, he is pointing fingers at Republicans, Congress, the tsunami in Japan, and the so-called ‘Arab Spring.’ The latter of which, you may recall, President Obama tried to claim credit for when Egypt overthrew President Mubarak.

Two and a half years into his administration, the “leader” of the free world does not have a plan for economic recovery that works and said that “there are a lot of good ideas out there and we’re going to listen to them” because he wants to “create jobs.” He must think the Cut, Cap, and Balance bill passed by the House was not a good idea. 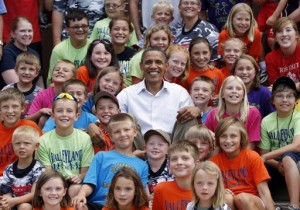 What a disappointment President Obama must be to the people who believed he could deliver on his community organizer-style campaign rhetoric. He is voting present with each committee he forms. Nothing has changed where Obama is concerned. Well, except for our longest stretch of a stagnate economy, unemployment is up, no net increase in private sector jobs so far. And did you know that youth unemployment in Washington, D.C. is now over 50 percent? That’s up from 25 percent a few years ago. In fact, minority unemployment everywhere is as bad as it has ever been under President Obama. Sure, I’ll vote for more of that! What?

A Reuters/University of Michigan survey on consumer sentiment came in at  the lowest since May 1980. That would be since the Carter administration.

Not helpful for President Obama trying to convince people he deserves reelection.

Reflecting back on the 9/11 attack is easy for me, because I’ve never forgotten it or the aftermath. The prayers and sympathy for the victims and their families goes without saying.

I remember vividly how that horrific attack galvanized America as one unit focused on helping the victims and, at the same time, finally fighting back at those who had been killing Americans for years.

Our enemy had a good day. Aside from killing innocent Americans, they hurt our economy so badly that it took years to recover.

Feeling eerily uncomfortable with pro-American unity in both political parties, Sen. Ted Kennedy must have felt his party was threatened to minority party status for decades unless he could do something to stop it. Sadly, I remember how America’s unity ended when Sen. Ted Kennedy made the false accusation that the Bush administration believed Saddam Hussein had “planned the 9/11 attack.” I remember how quickly the political Left ate that up, buttressed by a willing media. It was the ‘lion of the senate’ who politicized what was called the ‘war on terror.’ For that strategy alone, Ted Kennedy deserves credit for being the one person most responsible for prolonging the war to a tenth anniversary, and counting. That’s what I remember.

The reason I’ll never forget it goes to survival. Because the people in charge of the war on terror now, all Ted Kennedy acolytes, want to give the enemy our constitutional protections, lowering the bar to a criminal matter. They want to scrap the ‘war on terror’ and the most effective parts of the ‘Patriot Act,’ calling it an ‘overseas contingency operation.’ And we have Ted Kennedy to thank for it.

There’s a saying, “what goes around comes around.” This applies to Sen. Ted Kennedy too. He went from the lion of the senate to a maggot in hell. A small consolation in the fight that continues to this day.

Link: Schneider: Tell us what you remember, why you will never forget

Update 8/13/2011. A three-judge panel of the U.S. Court of Appeals for the 11th Circuit ruled Friday that a provision of the law that requires people to buy health insurance or face an annual penalty is unconstitutional. The ruling affirmed an earlier decision by U.S. District Judge Roger Vinson of Pensacola, Florida.

Curiously though, the court also ruled that absent the mandate, the Act can continue. What this means is that three judges on the U.S. Court of Appeals for the 11th Circuit pulled a severability clause out of their butt.

In Judge Vinson’s ruling, he concluded . . .

“Because the individual mandate is unconstitutional and not severable, the entire Act must be declared void.” {emphasis added}

The survivability of Obamacare without forced participation is zero. Well with one caveat. For Obamacare to survive without forced participation, the administration would have to speed up the elimination of the private health insurance industry process to before the next election instead of after. I don’t see that happening. So for all practical purposes, the fact that the rest of the Act may stay is moot. The court knows this. They also know that the Act contained no severability clause. That the court found the rest of the Act is constitutional and ignored the non-severability of the Act looks like a political decision with no real consequences. Well, except for the fact that the judges made a political decision here, instead of a legal one. Isn’t that like, not their job?

Let’s hope this gets to the Supreme Court this year. Today’s ruling did nothing to reduce the FUD factor. In fact, it only made it worse. That’s not what an economy struggling to survive needs if it is going to recover.

Markets don’t do well in an atmosphere of fear, uncertainty, and doubt. The power grab the Obama administration has perpetrated over various industries and companies is sending only one message to business. Watch out, you could be next.

I guess we now have the proof of what conservatives have been saying since forever: Looting is a result of liberal welfare policies. And Britain is in the end stages of the welfare state. Congratulations, Britain! You’ve barbarized your citizenry, without regard to race, gender or physical handicap! (more of Ann Coulter)

The headline from MSNBC is “Democrats fall short in Wisconsin recall elections.” There’s probably no one more disappointed with the outcome than Ed Schultz, who is partly responsible for the Republican victory.

Four of six Republicans held on to their seats. The people in Wisconsin have spoken, again.

Wisconsin goes to the polls today. Six recall elections will be decided. All against Republican state senators who supported Walker’s bill curbing collective bargaining rights for most public union employees.

The sore-loser drive has brought BIG LABOR dollars and rent-a-mobs to try to ultimately repeal the reforms that Governor Scott Walker enacted by harassing their way to regain a Democrat majority again.

Ed Schultz is there, the rent-a-mob is there. Well, about 300 people who sound like a studio audience is there. He claims they are there to fight for the middle class, but they are there to support BIG LABOR. Actually, it is a fight to keep the state from going broke and avoid big layoffs.

You will remember the tough time Walker had in getting the state house to get his reform bill voted on because the Democrat senators fled the state. I don’t see the vote going against what the people in Wisconsin already voted for. I could be wrong, but I doubt it.

Yes historic. And I’m not talking about his race. Everyone got over that the day after the election. (well, except for liberals/progressives) What else is historic for President Obama is that he now has the bragging rights for overseeing the country’s fall into decline while in office.

That would be the AAA credit rating that President Obama inherited from President Bush. A dubious honor for sure. What makes it worse is that not only was this train wreck of an economy predicted, it was preventable too!

The Obama administration says they’ve done all that can be done to fix the economy. They want to borrow and spend even more money, ostensibly believing that what didn’t work the last time, and the time before that, will work this time. Obama says we just have to sit tight and wait for the economy to improve. Recovering from the worst economy since the Great Depression is a “slow process,” the president said. What he really means is he has done all that he and his advisers know to do. It is not all that can be done.

There was a solution passed by the Republican-led House and tabled by the Democrat-led Senate called Cut, Cap, and Balance. By the way, Standard & Poor’s said that ‘Cut, Cap, and Balance’ was the only plan proposed by either party that would have preserved the AAA credit rating. So no one has the right to act outraged at S&P’s downgrade action. But for political reasons, not economic ones, the President has to pretend like there is nothing else that can be done. Just take it. Eat your peas. Get used to high unemployment, rising interest rates, rising costs everywhere, and a stagnant economy. That’s the change Obama has in mind. Don’t you wish you knew that a couple of years ago, before the election?