Yes historic. And I’m not talking about his race. Everyone got over that the day after the election. (well, except for liberals/progressives) What else is historic for President Obama is that he now has the bragging rights for overseeing the country’s fall into decline while in office.

That would be the AAA credit rating that President Obama inherited from President Bush. A dubious honor for sure. What makes it worse is that not only was this train wreck of an economy predicted, it was preventable too!

The Obama administration says they’ve done all that can be done to fix the economy. They want to borrow and spend even more money, ostensibly believing that what didn’t work the last time, and the time before that, will work this time. Obama says we just have to sit tight and wait for the economy to improve. Recovering from the worst economy since the Great Depression is a “slow process,” the president said. What he really means is he has done all that he and his advisers know to do. It is not all that can be done.

There was a solution passed by the Republican-led House and tabled by the Democrat-led Senate called Cut, Cap, and Balance. By the way, Standard & Poor’s said that ‘Cut, Cap, and Balance’ was the only plan proposed by either party that would have preserved the AAA credit rating. So no one has the right to act outraged at S&P’s downgrade action. But for political reasons, not economic ones, the President has to pretend like there is nothing else that can be done. Just take it. Eat your peas. Get used to high unemployment, rising interest rates, rising costs everywhere, and a stagnant economy. That’s the change Obama has in mind. Don’t you wish you knew that a couple of years ago, before the election?

Less than 10 minutes after President Obama blamed everyone he could for our economic problems, the DJIA fell below the 11,000 mark.

I’m guessing by the middle of this month the DJIA will be south of 10,000.

On Friday, the Bureau of Labor Statistics announced a drop in the unemployment rate from 9.2 percent to 9.1 percent.  And that 117,000 jobs were added.

The BLS also noted that there were 38,000 fewer people working in July than in the previous month. So how can it be that the unemployment rate ‘dropped?’

It dropped because the bean counters in Washington have reduced the pool of workers enough to cause the percentage change go in one direction when what is measured is actually going in the opposite direction. The BLS calls this “seasonally adjusted” as modified by the “civilian labor force participation rate.”

Look what the rate is if Washington used the same method of tracking unemployment that you and I use. Beginning with the active labor force as big as it was when Obama was inaugurated, the unemployment rate would be 11.7%.

If the unemployment rate goes up but is not reported, did it really happen? 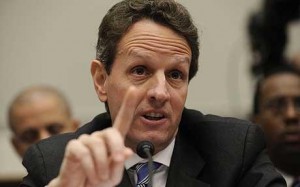 “They’ve handled themselves very poorly. And they’ve shown a stunning lack of knowledge about the basic U.S. fiscal budget math,” Geithner said in his first public comments about the credit rating decision.

“Terrible judgement?” This from a guy who earned the nickname ‘tax cheat Geithner’ for not paying his income taxes. Just like he blamed ‘TurboTax’ for his tax cheating problems, Geithner is blaming Standard & Poor’s poor judgement for lowering the United States’ credit rating for the first time ever to AA+, down from AAA where it has been for nearly a hundred years.

According to Geithner, it’s just because the credit rating company does not understand “U.S. fiscal budget math.”  No doubt they don’t understand the concept of spending your way to prosperity and borrowing your way out of debt. They don’t understand that increasing the national debt by 7 trillion dollars in ten years is a decrease.  What they do see is U.S. doing nothing to attack the public debt or the willingness to stop the deficit spending in the budgets that they have failed to produce. That is what Geithner means by U.S. fiscal budget math.

Some people are calling for Geithner to step down for his mangling of the economy. Even if he did, it would not solve the problem. His boss believes in the same fuzzy math and points fingers at everyone but himself too!