While Obama was accusing Republicans of playing politics on the backs of the unemployed last week, for holding to the principle of extending the $34 billion in unemployment benefits without adding to the already unsustainable debt, I tuned in to the Mike Malloy Show to see what they were talking about.

What I heard was more of Obama’s words coming out of Malloy. And then some. He accused Republicans as just being mean and hateful for not caring about the unemployed. And, that they just don’t care about the unemployed. Upon reflecting on the possibility of Republicans regaining control of the House, Malloy opined that it would just serve Republicans right to watch them ruin the lives of future generations by all their deficit spending. Then after the country would be brought to its knees by their reckless spending, then they would be out of power for generations.

I had to laugh at the idea that he apparently believed what he was saying. What he said sounded like the Obama administration’s prescription for the economy.

This chart shows which political party is robbing future generations of Americans. 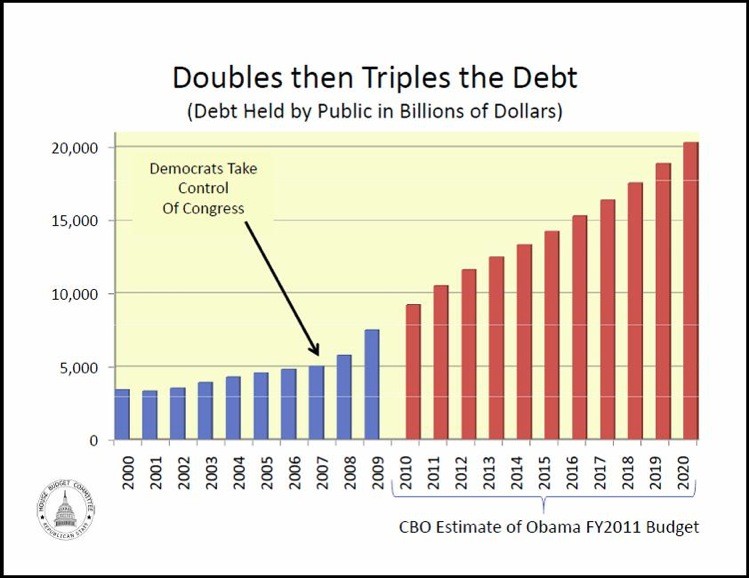 That Republicans are holding to the pay-go law does not seem like right-wing drivel, as Malloy calls it. I have to ask, who is it that is playing politics on the unemployed by denying them $34 billion out of the over $350 billion of the still unspent ’emergency’ stimulus package that had to be passed immediately or else the country would fall into ruin in a matter of weeks some eighteen months ago? Never mind that that money is held by China as our debt and really isn’t in the bank. But using that ‘money’ would not increase the debt.  No. Obama insists on keeping that slush fund and increasing the debt. Nor could Congress find $34 billion to trim out of the $3.7 trillion budget. This administration is the one playing politics on the backs of the unemployed and on the backs of future generations of Americans.

Besides all that, look how wisely he used the stimulus money. He used it to grow government and the government sector, not to stimulate self-sustaining private sector business and jobs. Government employment is way up. To those capitalists out there familiar with business, none of whom are in The White House, you understand that  increasing government size is increasing the ‘overhead.’ And who in their right mind would increase their overhead at a time when business is down? Only someone hell-bent on remaking America would do that. Oh that’s right. We elected just such a person, Barack Hussein Obama, Mmm Mmm Mmm.

Enough of the background already. So I called the show and told Malloy that Republicans did want to help those 2.5 million people whose unemployment benefits had expired. But they wanted it done without increasing the debt. There are plenty of resources available to do it.

It was about that time that he hung up on me and went on to say that I was just parroting what I had heard from Glenn Beck or Rush Limbaugh. Actually Mike, I heard it from the same place they heard it from, the floor of the House of Representatives and from the Senate. It was not ‘right-wing drivel.’ It so incensed him that he lost it, he pleaded to any other right-wingers listening out there (two or three of us?) to not call his show. We can listen if we want to but, he said, ‘please, don’t call.’

All that from a so-called radio talk show host who is even more rabid than Mike Papantonio. Malloy’s rantings makes Papantonio seem like a pussy, if you can believe that. Malloy pleaded to right-wingers . . .

Whenever you get the feeling that you really want to call this program, break your wrists or cut your hand off, or or do something to stop yourself from dialing this program.

This whole experience is instructive on a few levels about Liberals. Liberals don’t want to engage on issues. Liberal talkers really don’t want to hear a viewpoint that upsets their karma. And Mike Malloy’s talk radio show is for lemmings only.

Below is Malloy’s response to our brief dialog. It begins a little after he dropped the call, in a not very ‘Christian’ (his words) way. The show’s producer (Malloy’s wife) has not responded to requests for the audio portion of the dialog between Malloy and myself, but you can hear what happened afterward from the link below.