I guess one could say that President Obama is making some progress in gifting heads of state. But you would never know it from the US media.

Obama has a record on this since becoming President. One of the first things he did to outfit the Oval Office was to give the bust of Winston Churchill back to Great Britain after the offer to keep it for at least the next four years was turned down by The White House. That was in February.

A bust of the former prime minister once voted the greatest Briton in history, which was loaned to George W Bush from the Government’s art collection after the September 11 attacks, has now been formally handed back.

How far that move helped our image around the world is debatable. British diplomats were not impressed.

Considering the reason the gift was offered in the first place says more about Obama’s views of the war on terror and the attacks on 9/11 than his sensibilities for international diplomacy and relations with Great Britain.

Brown presented Obama with a pen holder crafted from the timbers of the 19th century British warship HMS President (whose sister ship, HMS Resolute, provided the wood for the Oval Office’s desk), Obama offered up … 25 DVDs of American movie classics.

Then came Obama’s trip to Great Britain where he and the first lady met the Queen.

The president, who was accompanied by the first lady, gave Her Majesty an iPod loaded with video and photographs of the queen’s 2007 visit to Jamestown, Richmond and Williamsburg, Va. He also gave her a songbook signed by composer Richard Rodgers.

In return, the queen gave the president a silver-framed, signed photograph of her and her husband, Prince Philip, which is reported to be a standard present for visiting dignitaries.

The next gift exchange happened in Saudi Arabia when the King presented the President with the King Abdul Aziz Order of Merit, 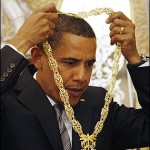 which is the country’s highest honor. From the picture, it could be easily confused with bling from MC Hammer or MC Obama. But to the Saudi Arabian people, it is a high honor bestowed on special people.

What has not been reported in the US media, strangely enough (I’m kidding), is the kind of 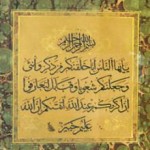 gift that President Obama gave King Abdullah. No, this time it is not something off an end-cap in Best Buy. For this visit, the president put a lot of thought into this gift, which took 5 months to make. So at about the time Great Britain was being insulted by all the above, a gift based on the Quran for Saudi Arabia’s King Abdullah was being made. It’s not that he doesn’t know any better.

It is a Qur’anic verse which says: “O mankind! We created you from a single pair of a male and female, and made you into nations and tribes, that you may know each other. Verily, the most honorable of you with Allah is the most righteous of you. Verily, Allah is All-Knowing, All-Aware.” (Qur’an, 49:13)

From the picture it looks like a nice gift. So why is it that the US media hasn’t reported on it? You have to look at Saudi media to find out. Doesn’t it show that the president has made some progress in gift giving? Besides, it does go a long way to reinforce the president’s sensitivities to Islam that he spoke of in his speech in Cairo. Do you think that’s why?