Iranian President Mahmood Ahmadinejad is coming to the United States to pal around with the hemisphere’s idiot, Venezuelan President 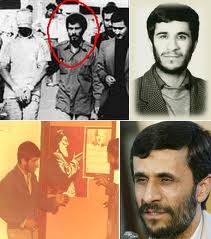 Hugo Chavez, and he also wants to visit ground zero. His request was denied, but he is apparently intending to go anyway with the Secret Service security detail normally assigned to visiting diplomats.

Nate Harris at Conservative Compendium has a novel idea.

I would like to be the first to suggest that Mahmoud be able to give a speech overlooking the pits where the WTC once stood, complete with holocaust denying, gloating, baiting, and admonishing of the USA. As soon as he’s done, give him the grand tour of american locales associated with terrorism and arrest him for questioning for his part in hostage taking in Iran in 1979.

To her credit, New York Senator Hillary Clinton doesn’t think he should be going there either. Am anxious to hear her remarks after he and Chavez get done with their Bash Bush tour at the United Nations, otherwise known as the Useless Nations . No need to question her patriotism, just listen to what she has to say about it after it occurs. That should suffice.

Congress is poised to land a one-two punch to Bush and the country. Perhaps counting on Congress renewing the tax cuts that were put in place in 2001 and 2003, those are the ones that have brought record revenues to the government and created over 3 million jobs, was being overly optimistic on how Democrats in Washington would act when they set to expire January 1, 2011.

Next, and more prescient is the NSA warrantless wiretapping program for terrorists and suspected terrorists. It is set to expire in February 2008.

President Bush today called on Congress to make permanent a law that gives the government broad authority to eavesdrop without warrants on phone calls, e-mail and other communication between people in the United States and suspected terrorists abroad.

The president wants Congress to extend the law, set to expire in February, that allows spy agencies to intercept the communications of suspected terrorists that pass through U.S. switching facilities.

All Congress has to do, led by Nancy Pelosi and Harry Reid, is sit on their hands and they will get everything they wished for. Raise taxes and disengage from the war on terror. They are campaigning on losing the war now, so for them it is a win win situation.

You know it was a matter of when, not if, Jesse Jackson would find a way to play the race card. Just to show that it is possible for politics to cross racial lines, they are both thought to be black, Jesse Jackson is saying that Barack Obama is acting white over the ‘Jena six’ incident. Jackson says the obvious, “If I were a candidate, I’d be all over Jena.” Presumably, Obama is acting white because he isn’t “all over” it?

While Jesse Jackson keeps digging, so does congress.