Much to the disappointment of Vladimir Putin, his puppet president was rebuffed by the six-member Shanghai Cooperation Organization. Putin finds himself to be the monkey in the middle.

China and several Central Asian nations rebuffed Russia’s hopes of international support for its actions in Georgia, issuing a statement Thursday denouncing the use of force and calling for the respect of every country’s territorial integrity.

A joint declaration from the six-member Shanghai Cooperation Organization also offered some support for Russia’s “active role in promoting peace” following a cease-fire, but overall it appeared to increase Moscow’s international isolation.

But certainly not for Poland. No! Missile defense systems for western aligned nations are not on Vladimir Putin’s approved list. Key phrase is ‘missile defense.’ Considering Russia’s history, and Putin’s history, and Putin’s current invasion and occupation of the sovereign state of Georgia, is it any surprise that they like the idea of selling offensive and defensive weapons systems to Syria?

Officials said Russian President Dmitri Medvedev has approved the sale of rockets, missiles, aircraft and air defense systems to Syria. They said Medvedev, in consultation with Prime Minister Vladimir Putin, decided to enable Damascus to select from a range of Russian weapons and systems.

Assad, who ended a two-day visit on Aug. 21, has also pledged to consider a Russian request to station the Iskander-E long-range, solid-fuel rocket in Syria. Moscow has asserted that the Iskankder could penetrate Israeli or U.S. missile defense systems.

Putin is really enjoying his opportunity to bully Georgia, Poland, and Europe. And with a seat on the United Nations Security Council, he is almost guaranteed to get what he wants regarding the Georgian invasion. Which is, annexing the disputed areas into Russia, if not just washing away Georgia’s border and occupying those territories permanently. Well, that is, presuming the West will just sit by and watch, and let it happen. 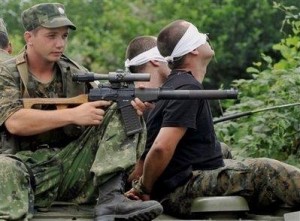 By anyone’s standard, when she says stop, and he doesn’t, its rape. Well, I should amend that a little. ‘Anyone’ apparently does not apply to Russia. They have experience in raping neighboring countries, just like they are doing right now in Georgia. Russia forcibly entered Georgia with their air force and ground forces, knocked out infrastructure, ransacked Georgian military complexes along with civilian property and civilians themselves, sank its navy and took control of its only oil port.

Russia’s president, Dmitri A. Medvedev, on Saturday signed a revised framework for a deal to halt the fighting in neighboring Georgia, which has stirred some of the deepest divisions between world powers since the cold war. But the Kremlin then indicated that despite the accord’s approval, it would not immediately pull its troops from the country.

Now, a so-called agreement to end the invasion and leave has been signed by Russia and Georgia. And Russia’s response is one that says that the agreement isn’t worth the paper it was printed on.

If you’re wondering what’s the big deal, and why is it any of our business who an imperialist Russia plows under? This video will answer that question.

The Russian invasion of the sovereign State of Georgia exposed just the tip of the iceberg when it comes to the capacity and capability of the rookie, Sen. Barack Obama (D-IL), to protect and defend the interests of the United States.

So when Obama’s first reaction to Russia’s military invasion of Georgia was wishy washy, and over the course of three days evolved into something more like John McCain’s (and my) reaction on day one, you have to grade Obama’s ‘3a.m. phone call’ with an F.

Does Obama’s grasp, or lack thereof, of Russian and European conditions make you feel secure? Electing Obama is really electing his hundreds of advisers that tell him what to do and how to react, because he has no clue.

Monica Crowley writes about Obama’s foreign relations experience. How’s this for the chair of the Senate Foreign Relations Committee’s Subcommittee on European Affairs? Have you seen this reported anywhere?

Obama’s utter lack of experience and even interest in Russia and its “near abroad” has surfaced in two ways.

First, he took a trip to Russia in 2005 in order to talk to Vladimir Putin about decommissioning Russian nuclear weapons. The Kremlin is still laughing at that one. Of course, that doesn’t stop Obama from wanting to decommission AMERICA’S nuclear arsenal. To set an example, of course. More laughter from Moscow.

Second, for the past year and a half, Obama has been the chair of the Senate Foreign Relations Committee’s Subcommittee on European Affairs. And guess what? He’s never held a policy hearing. No meetings, no witnesses, no testimony, no nothing. This is why Obama himself is a “know-nothing” on what is turning out to be a central issue for the United States, our allies, and for the campaign. But Senator Clueless never bothered to take an interest in Europe or Russia. He just wants your kids to speak Spanish and for you to refrain from visiting Europe to keep our “ugly American” quotient down.

Then there is this short list in experience compared to McCain, for the one campaigning to become Commander In Chief. Military: McCain 26 years, Obama 0. Congress: McCain 22 years, Obama 143 days.

In his own words, President Mikheil Saakashvili describes what is going on in his country and why. In light of everything going on in Georgia, don’t come away thinking that it won’t affect us here in the United States. Among the first targets that Russia sought to destroy, was Georgia’s oil port. If you still do not believe that oil is the lifeblood of not only our economy but of the world economy, you better think again. But this is not a war for oil. This war is for the future of freedom in Europe.

As of this writing, Russia has pressed on beyond the disputed territories in Georgia. In this David and Goliath war, Russia seems hell bent on its old ways of military imperialism. This time in a democratically elected government State.

As I write, Russia is waging war on my country.

On Friday, hundreds of Russian tanks crossed into Georgian territory, and Russian air force jets bombed Georgian airports, bases, ports and public markets. Many are dead, many more wounded. This invasion, which echoes Afghanistan in 1979 and the Prague Spring of 1968, threatens to undermine the stability of the international security system.

END_OF_DOCUMENT_TOKEN_TO_BE_REPLACED

One day, we are looking forward to the start of the Olympic Games. Then, out of nowhere, we are looking at war between Vladimir Putin’s Russia and the sovereign State of Georgia. This is a hard dose of medicinal reality that the free world must swallow, and deal with.

The suddenness of Russia’s air attacks and tank incursions against Georgia should be the wake-up call to the world that Russia is back to its old self. One could argue whether they had ever really changed, given their turning away from the concept of freedom and democracy under Putin’s first administration. Now in his second administration (under a different name), their idea of diplomacy between countries is military force, not the United Nations.

Russia uses the United Nations when it suits them, and blows them off when it doesn’t. Fact is, the U.N. is not capable of doing anything to solve this conflict. They have no experience in standing up to Russia in any fashion. If there is anything that I can agree with Putin about, it is the ineffectiveness of the United Nations to the point of their irrelevance in world affairs beyond serving as a global meals-on-wheels. The fact that he hasn’t taken whatever his gripe is with Georgia to the United Nations first, is proof of that. There hasn’t been any U.N. resolutions on the matter. Not eighteen, as in Iraq. Not even one.

This episode also makes the case for a new outlook on global security in some geopolitical organization of States other than the United Nations. Not to mention how our own presidential candidates and political parties view our role in the world and how do deal with people like Putin and countries like Russia that seem hell bent on shooting first.

And speaking of our candidates for president, all those who think that there will be unanimity in how to proceed please raise your hand. Peace through strength has been tried and worked. This is a time, if there ever was one, where the United States needs to be speaking with one voice, not just for the sake of Georgia and States like them, but for the world.

Venezuelan President Hugo Chavez is making preparations for state and local elections in November by turning back a referendum Venezuelans passed in December 2007. He has blacklisted all his political opponents. The target of Hugo Chavez is freedom and democracy, and citizens are taking to the streets in protest.

Just before his ability to make laws without the approval of legislators expires, temporary powers given to him 18 months ago, Chavez made 26 decrees that effectively neuter any chance for democracy to bloom, paving the way for a communist state. Speaking of the protesters . . .

Chavez said in a speech Wednesday night that their concerns are grossly overblown. “This is a democracy. They call me a tyrant – tyrants govern without laws. We’re making laws, and all those laws are for the benefit of the country,” Chavez said.

No doubt taking tips from his communist buds Vladimir Putin and Fidel Castro, Chavez’s idea of change is from a socialist state (he has already nationalized key industries in Venezuela) to a communist state.

related link: A Change in Chávez?