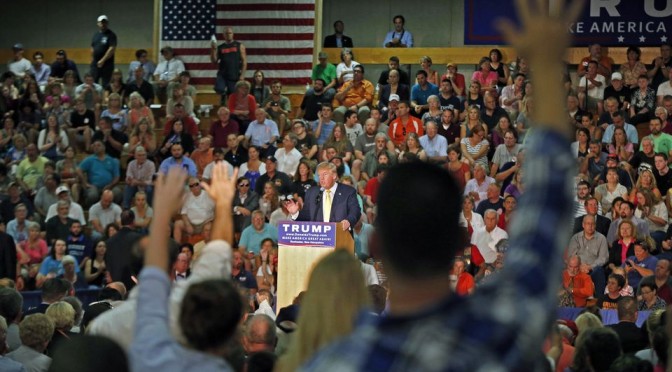 In the latest media attempt to derail the Trump campaign, it only shows who the real ‘racists’ are. Forget for a moment that Islam is not a race, but a religion. But remember that in this country, there is a First Amendment that guarantees freedom of religion for everyone. Even politicians.

So, if I may borrow a phrase from a loser of a Secretary of State who is running for president on her record, on whether Obama is a Muslim, what difference, at this point, does it make? He could be a Christian, a Muslim, or a frigging Witch. That’s all protected by the First Amendment and as such, is irrelevant.

The faux controversy is about why Donald Trump did not defend Obama at a press conference (something Hillary does not do without pre-screened reporters, attendees, and questions) from a member of the public who said he believed that Barack Obama was a Muslim, leading up to his question which was, what are we going to do about terrorist cells having training camps in this country? Trump laughed at his opening shot, and otherwise ignored it. But did answer the question (which no media outlet has bothered to mention) by saying he’s heard about that kind of stuff and would look into it if elected president. In short, it was a pretty generic answer without any controversy.

So from that, Hillary Clinton, the slavish media, and the DNC are going bonkers attacking Trump for something he did not do and did not say. Hillary calls that not acting presidential. Debbie was-a-man Shultz called Trump a racist.

What did Hillary say about the (probably planted) incident? She said that Trump should apologize. As though it is everyone’s duty to defend Barack Obama when anyone says something, true or untrue, about him. And because he didn’t do that, she retorts that Trump “should start behaving like a president.”

You know what the real dialog was. Now this is NBC’s interpretation. The meme . . .

A man at Trump’s event in Rochester, New Hampshire, asked the Republican presidential frontrunner how the U.S. can “get rid” of Muslims and asserted that Obama was a Muslim who was not born in this country.

Suffice it to say, this is not the first time that NBC has cut-n-pasted an event to change its meaning. (Zimmerman case comes to mind.)

Here is CNN’s reporting of the same event . . .

At a Trump event in New Hampshire on Thursday, an unidentified man said, “We have a problem in this country. It’s called Muslims. You know our current president is one. You know he’s not even an American. … That’s my question: When can we get rid of them?”

Cool. You have a pretty good idea of the meme over this fake controversy from the mainstream media and the struggling (for ratings) Cable News Network. Now notice those three little dots that precede “That’s my question.” Here’s what they failed to mention with those three little dots and, as you might expect, it changes the entire context of the dialog.

“Anyway, we have training camps growing where they want to kill us,” the man, wearing a “Trump” T-shirt, continued. “That’s my question: When can we get rid of them?”

From Hillary’s reaction, you would think that being Muslim, or accused of being a Muslim, is like calling someone an illegal alien, or the N-word. She was “appalled” of all the “hatefulness.”

“I was appalled,” Clinton told reporters here. “He should have from the beginning repudiated that kind of rhetoric, that level of hatefulness in a questioner in an audience that he was appearing before.”

Is being called a Muslim, or being a Muslim, something all that appalling? It should be instructive to note who the bigots, racists, really are. The media also conveniently forgot to mention who started the whole birther thing on Obama. It was Hillary’s own 2008 campaign.

If anything, it’s Muslims who should feel offended by Hillary’s reaction. Why, she’s not acting very presidential is she?