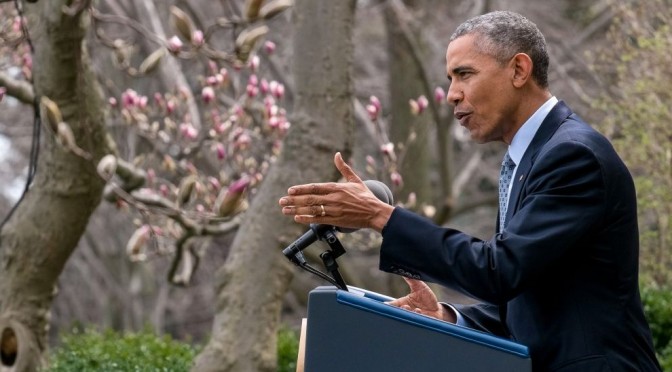 President Obama,  “Lie of the Year” Award winner, gave a speech Thursday, April 2, 2015, from The White House in the Bergdahl garden where he announce the essence of his ground-breaking agreement with Iran over their nuclear ambitions.

Today, the United States — together with our allies and partners — has reached a historic understanding with Iran, which, if fully implemented, will prevent it from obtaining a nuclear weapon.

He then contradicts himself and hopes you’ve already forgotten his opening line . . .

Iran will not enrich uranium with its advanced centrifuges for at least the next 10 years.

Meanwhile, Iran is accusing President Obama of lying to the American people about the “deal.”

Iranian Foreign Minister Javad Zarif accused the Obama administration of misleading the American people and Congress in a fact sheet it released following the culmination of negotiations with the Islamic Republic.

Zarif bragged in an earlier press conference with reporters that the United States had tentatively agreed to let it continue the enrichment of uranium, the key component in a nuclear bomb, as well as key nuclear research.

Zarif additionally said Iran would have all nuclear-related sanctions lifted once a final deal is signed and that the country would not be forced to shut down any of its currently operating nuclear installations.

Zarif went on to push back against claims by Kerry that the sanctions relief would be implemented in a phased fashion—and only after Iran verifies that it is not conducting any work on the nuclear weapons front.

We’ve seen this movie before. Goes something like, if you like your health care plan, you can keep your health care plan. This time, the movie involves a nuclear weapons program of Iran, a State sponsor of terrorism around the world that has vowed to wipe Israel and the United States off the map. A country that also concealed and lied about their nuclear weapons program for decades.

And now, the President expects us to believe that he is telling us the truth, and that Iran will offer complete transparency and stop cheating. There is a reason the president is trying to do this outside of Congress. And that is, Congress (and anyone with a little common sense) can see it’s a bad deal for the world and a good deal for Iran.

Obama’s negotiations with Iran and what he is telling the American people have all the characteristics of someone advertising the Brooklyn Bridge for sale or, a new government-run health care plan that is affordable, and, will lower premiums.

Links: Statement by the President on the Framework to Prevent Iran from Obtaining a Nuclear Weapon  |  Iran Accuses U.S. of Lying About New Nuke Agreement