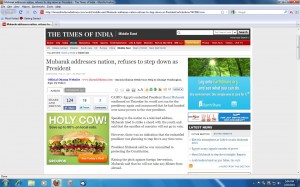 If anyone thought that President Obama had his finger on the pulse on the happenings in Egypt, his performance today should put that notion to rest.

I just saw the media waiting for over six hours for Egypt’s President Mubarak to announce that he is ‘stepping down’ today. While this was going on, people at The White House were saying that President Obama was going to have a statement on Egypt. The presumption was that it would be a response to President Mubarak’s stepping down.

Well, I guess the President must have had something better to do than to wait and see what Mubarak had to say, because Obama beat Mubarak to the cameras. Boy, talk about a diplomatic blunder. Obama showed, in case there was any doubt remaining, that the United States, at least under this president, can not be a trusted ally to anyone.

It’s bad enough that, to this date, Washington is still sending out mixed messages on Egypt’s troubles.  It is painfully obvious that voting ‘present’ on Egypt has not worked. And now President Obama again sticks his nose into Egypt’s business before he even knows what Egypt’s business is. One can only speculate whether Mubarak set up the whole drama which Obama fell for, hook, line, and sinker.

In his statement, which came after Obama’s, Mubarak chastised countries ‘abroad’ for not being helpful in the matter. Saying that he would never “accept diktats from abroad.”

“The question is not whether or not the latest American position pleases me. Ultimately, they have realized the need to conduct these major transformations gradually and on the basis of a roadmap with clear goals, guarantees, and phases. They were using the word ‘now.’ They said: You must do it now! But they changed their position… When someone says to me ‘now,’ ‘immediately,’ and whatever, I say to him: ‘Boy, go play somewhere else.’ We will do everything according to the interests of our people and country.”

So how is that whole improving our ‘image around the world’ thing going?

A new drilling technique is opening up vast fields of previously out-of-reach oil in the western United States, helping reverse a two-decade decline in domestic production of crude. This is good news where crude oil is concerned. And even better news for natural gas.

This is a twofer. An opportunity to get to and use more of the energy resources we have while reducing the amount of money we are currently shipping overseas for same.

And as an added bonus, it will give the energy deniers a wedgie to fret over.