Huh. Who knew the government was a cash cow for the newspaper’s postage account? Probably has nothing to do with any bias in reporting. Na. What do you think?

Centuries-Old Bailout of Newspapers is Going Away, Report Warns.

An analysis of the road show in Washington, or as Obama has made it, a campaign stop along the way to the remaking of America. Some people referred to it as the State of the Union Address. Your mileage may vary, and your comments are, of course, welcome.

But what frustrates the American people is a Washington where every day is Election Day.

Couldn’t agree more. It should stop. How about you go first? And when you get back from your town hall rally in Tampa, how about visiting the Oval Office for awhile? Sit at that nice big desk and maybe do stuff. I know. Ask Speaker Pelosi to show you H.R.3400.

I’m also calling on Congress to continue down the path of earmark reform. You have trimmed some of 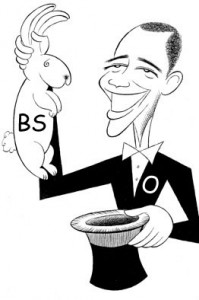 this spending and embraced some meaningful change. But restoring the public trust demands more. For example, some members of Congress post some earmark requests online. Tonight, I’m calling on Congress to publish all earmark requests on a single website before there’s a vote so that the American people can see how their money is being spent.

A year has gone by where you signed bill after bill with thousands of earmarks in each of the major ones. Did you forget that you campaigned on exactly what you said last night, or are you that arrogant that you think the American people are too stupid to remember?

And if the Republican leadership is going to insist that sixty votes in the Senate are required to do any business . . .Just saying no to everything may be good short-term politics, but it’s not leadership.

Saying no to socialized medicine, economic fascism, and committing inter-generational theft is a good thing. Does your interpretation of bi-partisanship include locking Republicans out of negotiations of important legislation then expecting them to approve it with their vote? And don’t blame Republicans for your failure. You have a super majority in both houses. Truth is, it is Democrats that are pushing back.  It wasn’t Republicans that were being bribed for votes was it? Community organizers handbook, ‘if you say a lie over and over again, it will eventually become reality.’ See above about the Republican’s proposal to reform health care and are you that arrogant that you think the American people are too stupid to know?

Last week, the Supreme Court reversed a century of law to open the floodgates for special interests – including foreign corporations – to spend without limit in our elections.

YOU LIE! And NOT TRUE! See above quote from the Community organizers handbook and are you that arrogant that you think the American people are too stupid to know?

Current federal law prevents “a partnership, association, corporation, organization, or other combination of persons organized under the laws of or having its principal place of business in a foreign country” from making, “directly or indirectly,” a donation or expenditure “in connection with a federal, state, or local election,” to a political party committee or “for an electioneering communication.”

We face a deficit of trust – deep and corrosive doubts about how Washington works that have been growing for years.

Yeah. Like that whole openness thing, how negotiations would be broadcast on C-SPAN. Did you forget that you campaigned on exactly what you said last night, or are you that arrogant that you think the American people are too stupid to remember?

To close that credibility gap we must take action on
both ends of Pennsylvania Avenue to end the outsized influence of lobbyists; to do our work openly; and to give our people the government they deserve.
That’s what I came to Washington to do. That’s why – for the first time in history – my Administration posts our White House visitors online. And that’s why we’ve excluded lobbyists from policy-making jobs or seats on federal boards and commissions.

Right, er I mean Wrong again. Well, I guess if you don’t count all those in your administration that you gave waivers to. That trust deficit you speak of is real, and where you are concerned, I think unrecoverable.

But if anyone from either party has a better approach that will bring down premiums, bring down the deficit, cover the uninsured, strengthen Medicare for seniors, and stop insurance company abuses, let me know.

And in true campaign style, the arrogance and disrespect that you showed the Supreme Court, really shows the level of respect you have for the Constitution that gives the Judiciary separate but equal status in our government. You obviously feel that you are above all that and it was embarrassing to see you lash out in that forum in that way. Reminds me of Hugo Chavez and the Castro brothers.