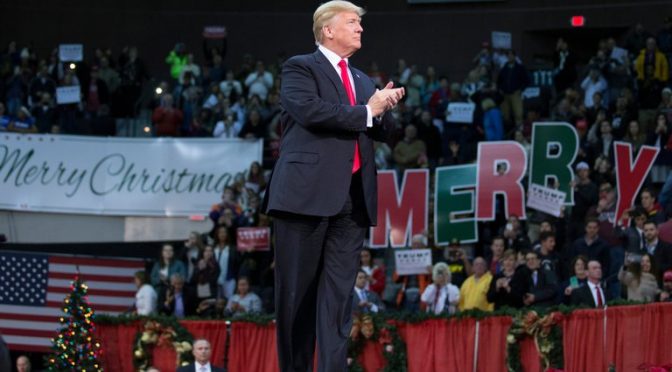 Was fortunate enough to see President Trump tonight in Pensacola, Florida. Was good to see that despite the freezing (for locals) weather, 12,000 of us filled the Pensacola Civic Center, or Bay Center as it is called today.

Just as on the campaign trail, President Trump was energetic and having fun, like everyone else there. This time, he not only spoke of what was in store for the coming months on important matters like tax cuts, health care, safe cities and neighborhoods, immigration and border security, draining the swamp and more, he started the night bringing us up to date with what he has accomplished in the first ten months of his administration. And it was a lot. Which begs the question, had it not been coming directly from him, do you think you would have learned about it from the news media?

Tonight’s event was billed as a campaign-style event, and that’s what it was. But it was so much more than that. Like most everything else Trump does, he is finally breaking the mold of Republicans governing by complacency.

As President George H.W. Bush found out, winning one election doesn’t mean you can win another by assuming everybody understands conservative principles.

It was President Clinton and later President Barack Obama who never stopped campaigning. Not one month of their collective sixteen years was a campaign ever over. President G. W. Bush followed his father and, never defended himself from constant attacks from his political opponents. You know, the ones whining about how divisive Republicans are.

Enter President Donald Trump. Along with everything else so non-establishment, Trump knows that to do what the American people elected him to do, he has to keep the people engaged and informed. Because he, you, and I know that the media certainly will not keep us  informed. More like deformed.

I doubt there is anyone who knows the media like Trump. What motivates him is saving America as it was founded to be, and meeting the folks, the forgotten ones, working people pursuing the American Dream. And no better way to do that than to keep the campaign current and constant.

Trump’s support comes from the American people. People who like him fighting back, taking the fight to them and the failed policies of the Left.  All while making the case for his policies and agenda that they and most Americans want and support.

So the next mind blower for the media, Democrats, the Swamp, and never-Trump Republicans is that Donald Trump is not leaving the campaign trail. Unlike Obama, the media did not make Trump. And hard as they try, the media can not break him or separate Trump’s supporters from him.