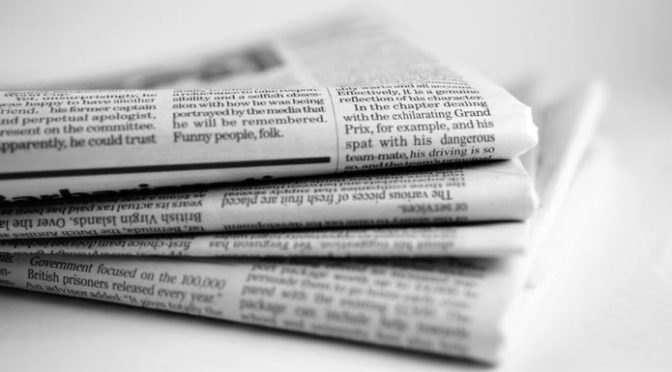 Industries come and go. When it comes to the print news media, like your hometown newspaper, it seems the industry is under pressure to stay in business. Circulation has dropped, their labor force (including the news department) has thinned, some of their processes have been outsourced, all in efforts to stay in business.

Not too long ago, the paper width of the PNJ (Pensacola News Journal) was reduced by maybe 20-25%. For national content, they added a USA Today section, but you will see it has the same news article as in another section, in the same issue. Now I’m noticing that they are publishing articles that they published a couple of days earlier. The same article, nothing new, but on a different page. Filling space once used by advertisers with duplicate news articles. On the marketing side, they offer fewer options.

The “print news media” industry is fading, and failing. Taking a big hit from online media and what has become known as the “new” media, the newspaper industry seems to be on its last leg for a number of reasons.

One brought on themselves through more advocating and/or shaping opinions than simply reporting the who, what, when, and where of what happened, contributing to intellectually curious consumers migrating to online news sources. The Internet, per se, is not responsible for the demise of traditional newspapers, there are just as many fake news sites out there too, but the mere presence and availability of it has changed the way we get up in the morning and get our news.  Like the long-gone Catalog Showroom industry, newspapers today are dealing with a consumer shift that just may be putting them irrelevant and, out of business.