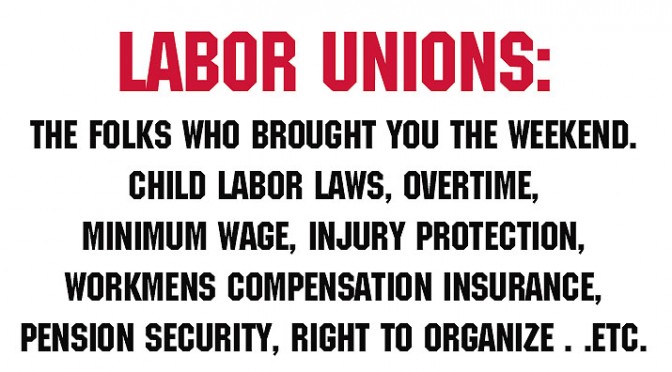 Have you seen one of those SEIU graphics that read “If unions aren’t needed anymore, why are corporations spending billions to destroy them?” Shoe on the other foot. If a group of union thugs wanted to make your business (assuming you have one) less profitable, what would you do? Let them?

Here’s a thought. Why don’t unions just cut out the middleman and create their own product, instead of becoming parasites on business and industry? Like any good parasite, you don’t want to kill the host, just suck from it as much as you can. Truth is, businesses don’t need a labor union to exist. But labor unions need government and/or business to exist.

Now the BIG LABOR advocates lament “Every American worker benefits from the hard-fought battles of our labor unions, but they are becoming extinct under our watch.” That’s also a true statement. Sucks to be them. Now they are the ones that need to learn a lesson. To get their own ‘wake-up call.’ Which is, be competitive in the marketplace, or lose. And union labor is far from competitive. And, they are losing. They are overpriced, and clinging to the last vestige of survival they have, the public sector. IE. government unions, where they are in bed with politicians who have no problems taking your tax dollars to pay for them and their unsustainable benefits and pension plans, so they (unions) can continue to give to their (Democrats) campaigns. In reality, it’s a huge money laundering scheme.