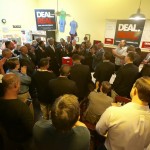 Whether by design or by accident, this years mid-term campaigning brought out the racist-ness and divisiveness in Democrat party operatives and its leaders. That the “race card” and class/gender warfare is employed is nothing new for Democrats. So what’s different this time? This time, Republicans are not campaigning on any kind of platform. Instead, Republicans are campaigning on the misery caused by the confluence of bad policies and incompetence of the Obama administration. It’s a given, considering two-thirds of the country feel Obama is taking the country in the wrong direction.

But whether that was by design, or the result of being shell-shocked by Democrats demagoging every policy initiative they advance is immaterial. My money is on the latter. The establishment republicans are afraid of their own shadow and, afraid of advancing true conservative values. (And I don’t mean social values.) What they’re really afraid of is being demagoged by Democrats because, history shows, they don’t know how to respond to being lied about. The result has been to draw out the worst in Democrat politics.

Now, there is evidence that their racial accusations are beginning to backfire in Chicago and Georgia, with Black preachers endorsing Republicans and denouncing the promotion of racial fear to, ostensibly, get Blacks scared enough to get out and vote for Democrats.

Devoid of anything positive to run on, all that is left is spreading racial fear. It’s not only what desperation looks like. It exposes the moral standard of the Democrat Party.