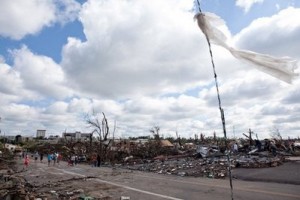 destructive seem mild. Whole towns leveled, an uncounted number of people lost everything, including their lives.

It is hard to compare hurricane Ivan or Katrina to the tornadoes of the last couple days. Those hurricanes leveled or damaged homes, towns, and neighborhoods too. And the people responded. Contractors and companies from all over the United States came here and had years of work for thousands of people. The rebuilding effort created more jobs and economic activity than any other single event in the 31 years I’ve been here.

There’s no enjoyment in saying this, but this weather disaster has just opened up a lot of work for a lot of people willing to move. Trying to coördinate the rebuilding effort on the national level requires some leadership and ingenuity in putting a  lot of people back to work. On second thought, the Red Cross is already setup to assist. Contact them and go there. Or, go there then contact them. A  dot GOV website would be most helpful. And as always, don’t wait for the government to invite you. Pack your car or truck and head to where ever you want to work and live for the next few years. You know, it’s that whole ‘early bird’ thing.

And before you even think it, the answer is NO. That’s not government intrusion. That’s government doing one of the few things it is actually responsible for doing.