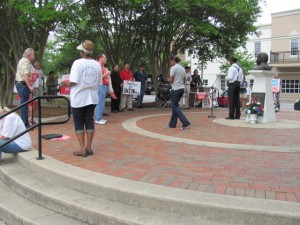 today. Lee Prior, the organizer of the event,  said that the pro-union movement was ‘electrifying people across America’ like it did 43 years ago when Dr. Martin Luther King Jr. marched to organize black sanitation workers in Memphis, and was later assassinated.

The crowd assembled was hardly a crowd at all. There were 30 people at the Dr. Martin Luther King, Jr. Plaza, including the speakers and sound crew. Like all such rallies there was an activist sign-up list. They garnered 15 names for that.

The keynote speaker did not attend. The organizer read a statement from him instead, saying that he had to be in Tallahassee taking care of business there. Then Jerry McIntosh, the head of the local Movement For Change group spoke. 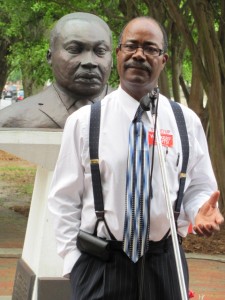 with Dr. King. It was labor unions that started a 40 hour work week, it was labor unions that got us sick pay, vacation pay, health insurance, retirement and pension plans, etc.. It was almost as though he was transported back to the 60’s. All of which was met with a ‘oh hum’ from the supporters. Fact is, all of what he said labor unions started are commonplace in non-union work sites today. They do deserve the credit for improving the workplace for ‘the workers.’ And because of their earlier success, all employers have learned to take care of their employees to where now, they have caused their own demise. Evidence of that is the shrinking number of union jobs in the private sector.

They were orderly and polite. But the reason they were there in the first place, the reason they were protesting, was kind of fuzzy. The CWA printed up some red signs saying ‘Stand Up for Workers’ Rights! Granted that public sector labor unions are in much disfavor with the American taxpayer now that money is tight and budget deficits are high. They have to realize, painful as it might be, that the public funds that pay them do not come from trees. And, like their private counterpart, they have to, or are being forced to, face the reality that like a private company, the government has financial limits too. 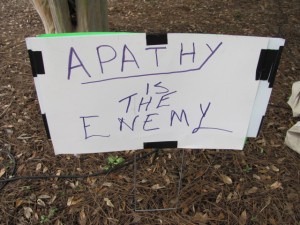 A smart parasite knows not to kill the host. Private sector unions know that they won’t have a job or a future if their company has to close its doors. Labor unions are not dumb. But they know that the government isn’t going to shut its doors. They also know that they own the Democrat Party, who will stop at nothing to repay them for their campaign contributions and street mobs. As if granting exemptions from Obamacare to labor unions isn’t enough, the latest quid pro quo revealed today is $2 Billion to unions, state public employee systems, and big corporations to subsidize health coverage costs for early retirees. Including ‘Pensacola Junior College’ and Escambia County.  The biggest single recipient of an early-retiree bailout is the United Auto Workers, which has so far received $206,798,086. They seem to be OK with that.

Their problem is that the taxpayers have reached the point, as have state budgets around the country, that things have to change if anyone is to have a future. Otherwise, they will remain One . . . boil on the butt of American taxpayers.

Don’t you just love all the accoutrements that come with that peaceful religion of Islam? I apologize for the ambiguity in the use of the word dummies. In this case, it applies to those who don’t know about Sharia, and to those that practice it.

Only 14, Bangladeshi girl charged with adultery was lashed to death – CNN.com.