It’s election season in Venezuela too! Legislative elections are being held on September 26, 2010, and Hugh Chavez (the hemisphere’s idiot) is only allowing candidates he likes to use the country’s media outlets for campaign ads. The ones he does not like are left out. He is breaking the campaign laws in Venezuela but Chavez isn’t worried one bit about that. Because, he says, ‘I’m a political leader.’ He does what he feels necessary to shape the political landscape to suit his socialist agenda for Venezuela.

An electoral official accused President Hugo Chavez and his allies of breaking campaign laws by using state-run media to berate rivals and praise friends ahead of this month’s legislative elections. 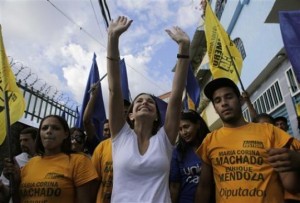 Vicente Diaz, one of the National Election Council’s five directors, said Chavez is violating legislation prohibiting elected officials from using their posts to promote candidacies. Chavez has ignored the law, which also bans the use of state media and public funds for campaigning.

While we are visiting voters, going from house to house, the ruling party’s campaign is imposed through televised speeches.

It’s enough to make President Obama’s inner circle jealous. It is also interesting to note how many of the mainstream media outlets in this country no longer have the links active. One would expect that for a President to break the law to control the media message to influence election results would be of interest and at least be on the front page. Wouldn’t you? Have you even heard about this?