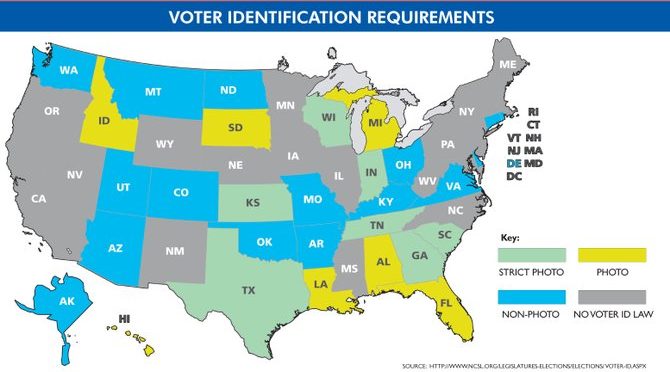 If you don’t pay attention to what the media, liberal-stacked federal courts, and the Democrat politicians in Washington have to say about shoring up voting integrity, you will be surprised to learn that they say Latinos and Blacks, above all other people, are incapable of getting a photo ID. And because of that, having to require a positive identification is called voter suppression, even racist.

That was the reason Wisconsin and Texas were met with push-back when the people in those states voted for voter ID.

Texas’s strict voter-ID law was among them. A federal appeals court ruled last year that the law hurt Latinos and African-Americans, who were less likely to have the IDs. It later ordered state officials to change their public education campaign on new ID rules.

Also not surprisingly, the two groups targeted as being discriminated against, are ones that traditionally register Democrat. For Democrats, it doesn’t matter if they run across the southern border or are shipped in as “refugees” from anywhere in the world.

The 2016 Democratic Party platform declares, “we will continue to fight against discriminatory voter identification laws, which disproportionately burden young voters, diverse communities, people of color, low income families, people with disabilities, the elderly, and women.” Yet, at their own convention, it seems like a different set of rules apply.

To those groups that the media and the Left say are disenfranchised because they just can’t get a valid picture ID, here is your challenge. If you want to vote, picture/voter ID’s are free for the asking. And, you have two years to get one.

If ending voter disenfranchisement is ever to be tackled, it isn’t going to come from not requiring a valid voter ID that verifies citizenship. It will come from requiring one.