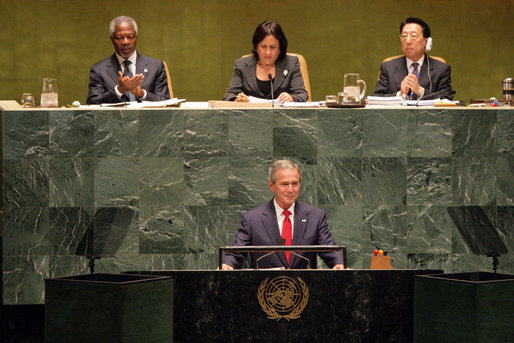 While the media is preoccupied with changing history where the Iraq war is concerned, and, trying to blame G.W. Bush for the rise of ISIS instead of Obama, for losing everything the U.S. won under Bush, here’s a little refresher from ten years ago.

There Were Seven Reasons, Not One

Also note that all the links in that post, the transcript, the audio, and the video of Bush making his case to the United Nations were to The White House website. After Obama took office, all those links to what happened in “our house” were scrubbed.

Here is a link to the transcript, where you can see for yourself, all seven reasons for going into Iraq. It was not, as the meme today portends, just WMDs. Also, know that Democrats voted to approve going into Iraq too. As did the United Nations.

And how timely a subject. Look at the other post in this link, If We Leave Now, They Will Follow

That President Obama lost the war that Bush won should come as no surprise. But you won’t hear that in today’s mainstream media. The meme today is, what else? Blame Bush.

Links: Text Of Bush Iraq Speech To U.N. |  There Were Seven Reasons, Not One  |  If We Leave Now, They Will Follow