Outspoken Nutjob Rep. Alan Grayson (D-FL) topped the “Muzzle” awards on Tuesday, earning the dubious distinction for asking Attorney General Eric Holder to investigate a Web site that parodied his campaign site. This is the same guy that said on the House Floor that Republicans’ health care plan is for sick people to die quickly.

The annual award list, created by the Thomas Jefferson Center for the Protection of Free Expression, is presented on April 13, Jefferson’s birthday, to remind people of the third president’s unavowed commitment to free speech.

The center says the awards are handed out for “some of the more egregious or ridiculous affronts to the First Amendment right of free speech.”

For urging the U.S. Attorney General to seek a monetary fine and a 5 year prison sentence against a vocal critic for alleged violations of Federal Election law that, even if true, represent minor transgressions, a 2010 Jefferson Muzzle goes to… U.S. Representative Alan Grayson (D-FL).

In December, Alan Grayson (D-FL) won the M.R.I.O.T.D. award for the same offense.

Is it a parody or is it how the Left reacts to free speech when the speech happens to come from people they don’t agree with? I report, you decide.

The history of Libs and free speech seems consistent with the latter. In this case, they are conspiring to impersonate tea partiers for the purposes of discrediting them and minimizing their effectiveness.

To be sure, the media will be looking for them to assist.

Here’s a screen shot of the website. Taking a page right out of Saul Alinsky’s book for radicals. 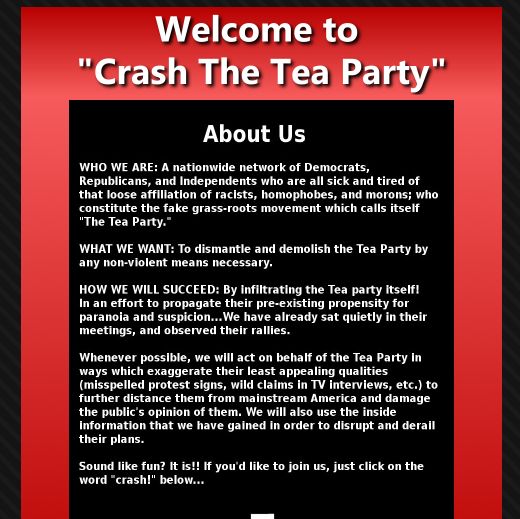