The Tea Party in front of University Mall today was a ton of fun for me. And it was good to see 1000-1300 people of all ages, and of all political parties, come out to say WHOA! No Mas. 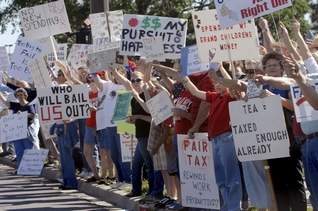 I saw a lot of enthusiasm on their faces and in their voices. It tells me this isn’t a one-day phenomenon. As for the FairTax, there were a lot of supporters out there that brought their own signs. And it was more than just Huckabee supporters.

Congressman Jeff Miller (R-FL) stopped by and thanked everyone there for doing what Americans can do. Exercising their freedom of speech to send a message to their government.

I’ve never seen 1000 people lining Davis Hwy in front of University Mall before for any cause. By comparison, the crowds at the courthouse for the Bush 2000 election were about 600 people, if my memory serves me. It ended up being a fun night because thanks to the chanting crowds outside and Joe Scarborough inside, they successfully stopped Gore’s lawyers from excluding the overseas military ballots which, you will recall, was what they were trying to do.

Seems to me there is more public activism, or pissed offism, now than in 2000. Of course the stakes are way higher now. Look at this event as the beginning of a peaceful transfer in power in 2010 and 2012.

Sean Dugas says it pretty well in his Pensacola News Journal article ‘Not a penny more.’