President Obama demonstrates, with the help of this stunning one-minute video, starring President Obama, exactly what an “empty suit” looks and sounds like.

Compare what he says today to what he has said in the past, going as far back as when he was a candidate running against Hillary Clinton, and you’ll realize that this guy has nothing new in store for America than what we’ve already seen.

Same speeches. Same promises. Are you better off?

What are the chances the mainstream media will notice the same playlist on the TOTUS? (Teleprompter Of The United States)

In 2010, the last time “the Bush tax cuts” were scheduled to expire (remember the Democrat-controlled congress wouldn’t pass those tax rates into law unless they were ‘temporary?’) President Obama said that raising taxes during a recession would be counter-productive to any recovery. A correct statement. So the bill was extended two years. Notice too how tax cuts expire and tax increases don’t.

Now two years later and in another campaign season, his stump speech is that it was those “Bush tax cuts for the rich” that caused our economic trouble. That, and his claiming ignorance. Ignorance that the economy was so bad that he and his advisers did not know how bad things were. You’ve heard it. It’s all Bush’s fault.

How’s this explanation work for you? ‘It was those tax cuts that caused the economy and jobs to tank. That’s why I want to extend them.’

I don’t know how President Obama sleeps at night when he continues to lie to us to advance his agenda. He does it because it works on the ‘less informed.’ Or as Boortz refers to them, the ‘dumb masses.’ It’s unfortunate for America that Community Organizer Barack Obama can’t be honest about it. And he deserves to be re-elected for that?

Big news in Colorado. The 2008 election made Colorado a Blue state for the first time in 15 years, Obama 54% McCain 45%, buoyed by the support of the state’s growing Hispanic population, a key demographic to victory in 2012. So you would be surprised to see that 63.5% of the voters rejected Proposition 103 Tuesday.

Prop 103 was a $2.9 billion tax increase in sales and income taxes to be used for schools. I think this marks the first time that the ‘it’s for the children’ excuse has not worked. The people of Colorado feel they are paying enough taxes already and expect the state to do the job with what they have.  A notion contrary to liberal dogma.

“We need to do this for our kids,” said Heath, D-Boulder. “Our kids can’t wait.”

“This is a victory for all Colorado taxpayers,” said Senate Minority Leader Bill Cadman, R-Colorado Springs. “We can’t help children by bankrupting their parents.”

It looks like ‘it’s the economy stupid’ is paramount in the minds of the people of Colorado and spells trouble in 2012 for an administration that only wants to raise taxes more.

Lame Duck and current Senate Majority Leader Harry Reid (D-NV) has one last Left Hook to add to his former boxing career. He just may attempt to reverse himself, and those in this video, regarding the filibuster by changing the rules in the senate to make it a simple majority.

While echos of the Nuclear Option are still bouncing around the halls, Democrats are just fit to be tied that some of their pay-back legislation was blocked by the filibuster. They would like to ‘fix’ that for the next Congress in ways that they know best. Just change the rules before they get there. The non-passage of their union-support program called Card Check, a Public Option for ObamaCare and Climate Change legislation really ticked them off. And lets not forget the Mexican Dream Act.

Considering how much pride Vice President Joe (BFD) Biden took in legislating against the will of the American people, slipping a few more goodies in on the last day in power could only be a bonus. 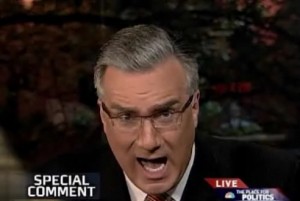 Rep. Alan Grayson (D-FL), the man who made a fool of himself and his party when he said on the House floor that the Republican health car 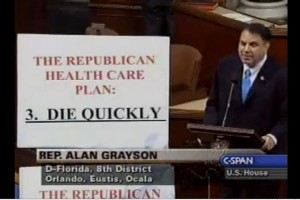 e plan
was for sick people to die quickly, was voted out of office on Tuesday. Voters in his district decided it was his representation that they wanted to die quickly. They elected Daniel Webster, a Republican 56% to 38%.

He has an explanation as to why he lost so big. He said it was because Democrats were too appeasing to Republicans over the last two years. What? I guess that if by appeasement where Obama’s signature legislation is concerned, Obamacare, you mean that you shut out Republicans from any input in the creation of the bill and not allow any amendments, then yes, they were appeasing.

I’m not a doctor, but I’ve seen doctor shows on TV. And it seems to me that Alan Grayson needs some counseling for Post Election Stress Disorder.

The people have spoken. Republicans regained majority control of the House. Question for President Obama is two-fold. Have you heard the voice of the American People? Will you listen to them?

This mid-term was a dramatic shift in power from one party to the other. But it was not a Republican victory as much as it was a victory for conservative principles. Over the last 12 months and culminating tonight, we have witnessed the ascension of conservatism in America, caused mainly by the direction that President Obama is leading us. Republicans are on notice, just as much if not more than Democrats, to get back to basics as described by the tea party movement.

Starting today, Republicans and Democrats are on probation. It’s not just the spending and debt issues that have brought the economy to its knees, but the role of the federal government that threaten to bring the American people to their knees. The message to Washington is to fix it or pay the price in 2012.

Related link: What A Conservative Is

Pennsylvania Gov. Ed (Fast Eddie) Rendell (also former DNC chairman) is but the first today to offer an explanation for the anticipated Democratic losses in today’s mid-term election. No doubt others will follow.

His excuse is typically nuanced. A new take on ‘we just didn’t get the message out.’ Rendell says their message was blurred. ‘We’ve got to learn to explain and communicate what we’ve done a lot more clearly,’ he said. Acknowledging the Obama effect on the anticipated poor results, Rendell also said ‘expectations were unreasonably high’ for Barack Obama when he took the presidency. Do ya think? That’s code for, this is what you get when you run on smoke like hope and change and have the media pumping you up to be America’s Messiah. The empty suit has fallen to the floor.

No Eddie, it’s not because your message was not clear. It is because the folks don’t like the message they hear or the policies they see. In living color Eddie, here’s why.

And from the Huffington/KOS/Ring of Fire crowd, we’ll know doubt hear that it’s because Obama is black.

Tomorrow is Election Day. Before you head to the polling place, take a moment to remember March 21st, when the Pelosi Congress cast its vote for Obamacare. The enduring image of that day is one of Congressional Democrats arrogantly dismissing the pleas of thousands of Americans gathered outside the Capitol Building begging them not to inflict this disastrous bill on us.

In the end this bill wasn’t about health care reform; it was about control and government mandates and fines for not purchasing a government-approved insurance plan. The bill jeopardizes the very thing it was supposed to reform. Every day we hear about doctors leaving the Medicare system; increased premiums with talk of price controls; rationing becoming standard practice; and panels of faceless bureaucrats deciding which categories of treatment are worthy of funding based on efficiency calculations (which I called a “death panel”).