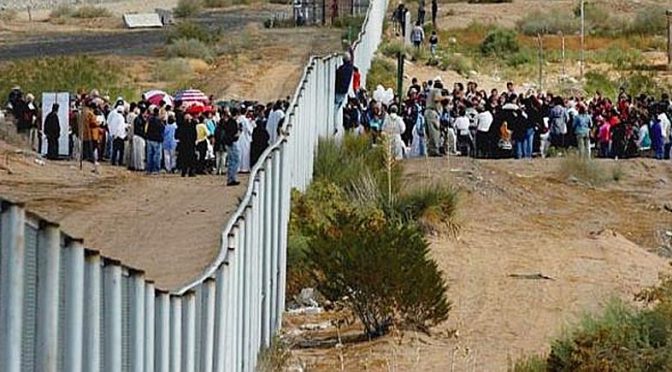 Democrats say nyet to Trump’s request for $1B to get the border project started. The same Democrats who voted for it* in 2006, who include Sens. Schumer, Pelosi, Clinton, and Obama.

Of a $3Trillion budget, they are saying no to .1% (one tenth of one percent) of the spending budget. Shows how bad they don’t want to protect our border and our people. Not to mention how much they care for the will of the American people who elected him.

Below is a dialog of both sides of the issue swiped from my Facebook page. Commenting is Derek Cosson and myself. H/T to Derek for his civil, thoughtful response.

Have anything to add? Use the comment section provided.

Cosson The wall is a really dumb waste of money.

Calloway Disagree. If you want to talk waste of money. Border security, with a wall, double fencing, all the electronic bells and whistles, is a one-time charge of somewhere between $15-25 billion. One time. (At $25B, that comes to $200/household. Where do I send my check?) The financial cost of illegal aliens here is $113B PER YEAR, or $904/household, per year. There’s your waste of money. The burden on education, health care, infrastructure, prisons, jobs and unemployment is not the only cost. That $113B is not counting the social cost of these illegal aliens. Does not count the people illegals have killed, raped, robbed, and assaulted. That is the social cost you can’t put a price on.

Cosson Your argument rests on the premise that the wall would somehow eliminate illegal immigration, though, and it won’t.

Calloway They say illegal crossing has dropped considerably in the last few months. I don’t think a wall will “eliminate” illegal immigration. It will be doing all that we can do to prevent it. While not building a wall, fences, etc, will guarantee illegal immigration forever, drug cartels, terrorists, human traffickers, gangs, all that. To me it is no different that having a lock on the door of your home. Since it won’t stop a burglar, will you take your lock off?

Cosson It literally astounds me that anyone who claims to be a fiscal conservative could get behind this project. It’s the literal definition of government spending run amok. In addition to the insane capital cost of this wall, it’s going to cost hundreds of millions of dollars a year just to maintain it. All with literally zero evidence it will do anything at all to impact the problem it’s intended to address. If we build a wall, they will build ladders and tunnels. But the bottom line is this: we have an insane deficit. We cannot afford this, and its questionable benefit doesn’t merit charging it to the nation’s credit card.

Calloway When the gov’t does what it’s supposed to do, keep us safe and sovereign, I don’t see that as running amok. Granted there’s a lot of pencil sharpening to do to reduce deficits, and the unsustainable national debt. But in my first reply, the numbers demonstrate that a secure border, and enforcing immigration law, will do both. I just can not accept the notion that doing nothing to stop illegal immigration, and granting illegals amnesty and voting rights, is good for America. The problem is in Central America, and it’s not ours to fix. If their governments were not so corrupt, and economies so socialist broke, they wouldn’t have a reason to flee. But it’s just like our bleeding heart liberals to make the rest of us pay for their better future.

*Actually, in the 109th Congress, H.R. 6061 , Secure Fence Act of 2006, was for building a fence, with other bells and whistles, with the goal of gaining “operational control” of the border. The purpose of which was to keep out all unlawful entries into the United States, including entries by terrorists, other unlawful aliens, instruments of terrorism, narcotics, and other contraband. Congress passed the bill.  President Bush signed it into law. It covered only 649 miles of the 2000 mile southern border. Trump’s proposal includes all that plus a wall in appropriate places. 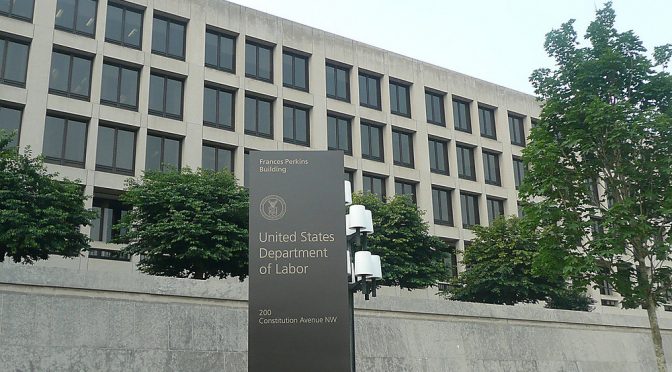 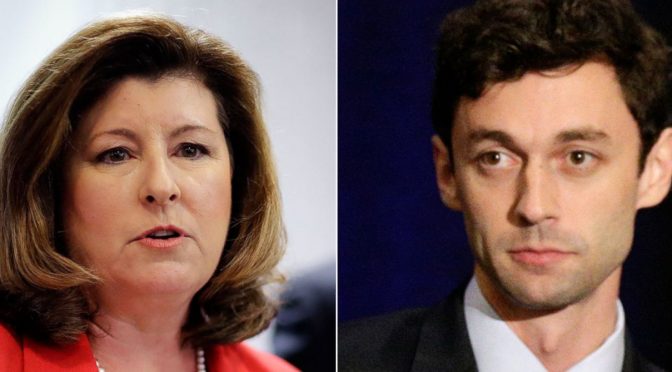 Garance Franke-Ruta, the Senior Politics Editor at “Yahoo News,” has a story about Georgia’s 6th Congressional District special election Tuesday to fill Rep. Tom Price’s seat. Her report has a banner in it called “RESISTANCE REPORT.” Making no claim at objective news reporting. It is the media, Yahoo included, that is the driving force for the Democrat Party. The days of the media carrying the water for the party have past. That was the case when the party was strong, and had a message that resonated with Americans. Absent that, the media has taken the ball. Now, the party follows them. 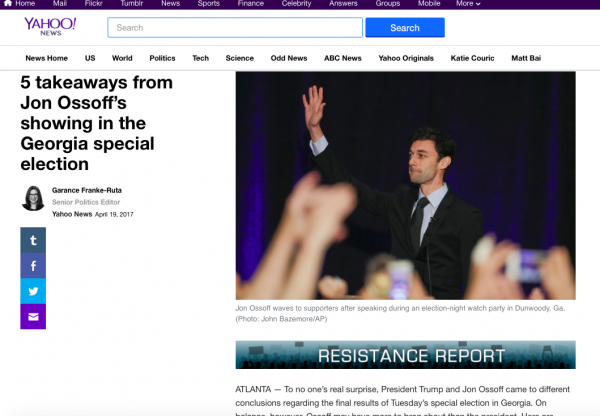 Her takeaway #2 is worth commenting on. Garance Franke-Ruta says . . .
Karen Handel is more vulnerable than she might seem, even with Trump now in her corner. Her inability to consolidate the GOP vote — she won 19.1 percent of the total field, against 10 other Republicans — despite being well known in the Sixth District suggests enthusiasm for her candidacy is not terrific.
Another way to look at the field of eleven candidates, like we saw in the last presidential primary, is that the GOP has a  big bench. There are a lot of people who want to be involved, who care about the country. And for that, she blames the candidate, Karen Handel, for her “inability to consolidate the GOP .” With that analysis, I suppose you could say that Jon Ossoff consolidated the Democrat Party so much that there was no candidate in Price’s district to run.
Link: 5 takeaways from Jon Ossoff’s showing in the Georgia special election 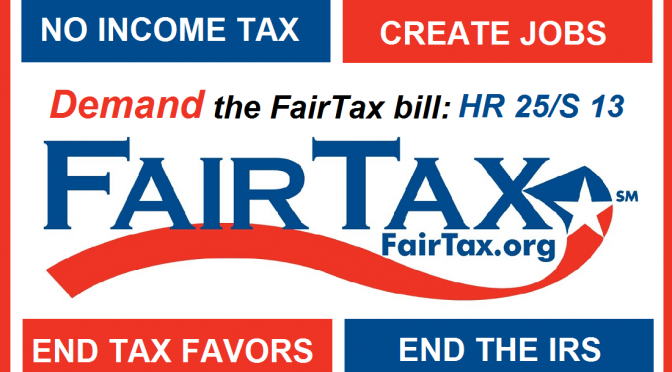 I’m afraid that the “tax reform” in the works is not going to be the game changer needed, the FairTax. The politicians are not willingly going to give up the Tax Hammer. It gives them too much power and lines their pockets with campaign cash. It is up to we the people to demand it.

Enactment of the FairTax would be the greatest transfer of power from the government back to the people since the Declaration of Independence. Instead of paying 39% of what you earn, you’ll pay 23% of what you spend, and keep all that you earn. Because your gross pay will be your “take-home” pay, the FairTax will be an economic generator and job creator for people, big and small business. All the while still generating the same amount of money to fund the government and its programs. 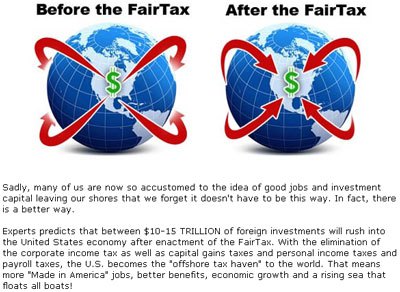 Just how can the FairTax be revenue neutral compared to the current income tax? Simple really, when you consider that the tax base expands from just those lucky ones who have jobs to everybody within our borders who purchases any new good or service.

With no tax returns to file, aside from eliminating the need for the IRS, the FairTax will end tax fraud like this; Three Indicted in Florida for Using Stolen IDs to File Tax Returns Claiming More Than $6.8 Million in Fraudulent Refunds.

Here’s a great presentation of the FairTax from the guy who wrote the book on it, Neal Boortz

Neal Boortz podcasts, like this one graciously lifted from yesterday, are available on ConnectPal for a paltry $4.99/month. 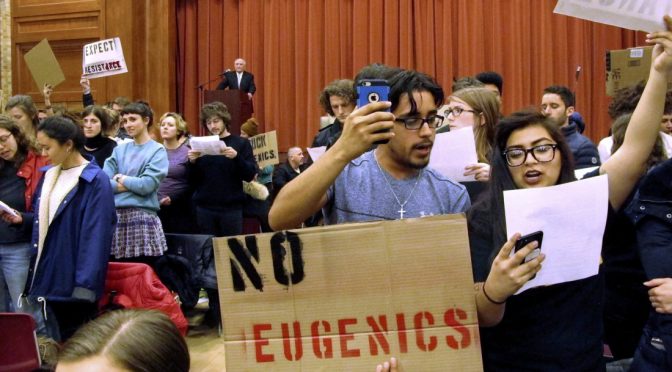