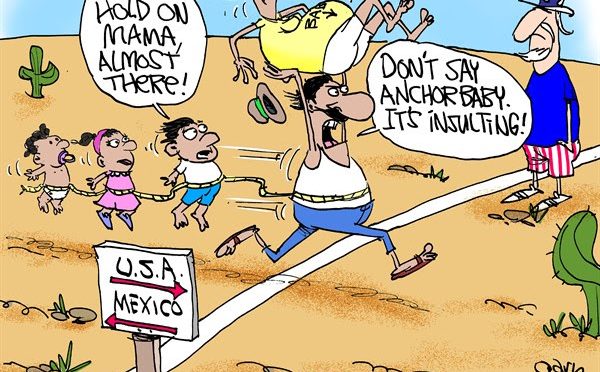 The popular meme about citizenship is if you are born here then you are a citizen of this country.  That’s not the law. The law in the 14th Amendment says . . .

But for argument’s sake, let’s say that a child born (in an American hospital paid for by American taxpayers, or not) a week after his mother ran across the border is a citizen. Proponents of open borders, sanctuary cities, and general all-around lawlessness will say “well, you can’t deport the mother because that would break up the family.” Hence the term “anchor baby” was also born.

There is no compelling reason to split up this family. Only a compelling reason to send them all back across the border they came from. You deport the parents, and the parents take their minor child with them. They have a distinct choice. Either be deported with your whole family or go to jail for a few years for child abandonment for not taking your infant with you.  Followed by losing custody of the child. But, the illegal birth parents will go one way or the other. With or without their child.

The whole notion of an anchor baby is one part of the “welcome mat” that needs to be pulled if we are ever to regain control of our borders and sovereignty.

Links: Anchor Babies  |  What Comprehensive Immigration Reform Should Be