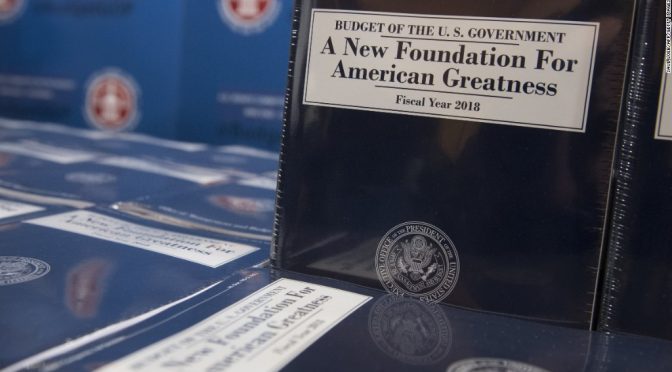 The Democrats’ pushback to Trump’s budget proposal is nothing short of irresponsible and insane. They claim that the budget will actually kill people. They’ve been saying that since 1995. And since 1995, the budgets, and government itself, have done nothing but grow.

So you can see why the hysteria over a budget that comes to balance in 10 years. Something the Obama administration not only did not do, but stated that achieving a balanced budget was not even on their radar. Their plan was to grow government and expand government involvement in our lives way beyond the boundaries of the Constitution. The crown jewel to that end being Obamacare, eventually leading to single-payer.

When you compare where we were in 2007 to where we are in 2016, you can understand why Democrats are apoplectic and hysterical. Having done their best (with full cooperation from Republicans) to grow government, the notion of fiscal responsibility now comes as a shock1 they just can not accept.  After all, they’re not paying the bill. Our grandchildren and great-grandchildren will if something is not done now to stop it.

How have budgets grown since 2007?

Not only has the spending and borrowing grown, but since Obama started spending in 2008, his administration managed to more than double the national debt.

Today, Trump’s budget is projecting 3% growth in GDP, and the NYT characterizes this as “improbable economic growth.” How quickly they forget. 3%,  improbable. 6%, no problem. No, they didn’t forget. That’s just the bias of Fake News supporting their man.

Time to come back to reality. Obama’s budgets were scored by the CBO for GDP growth from 3.6% to 3.1%. But never came close, coming in around 1.5% growth in GDP.

Speaking of reality, look what the CBO has to say about unfunded mandates that already consume 56% of all federal spending. That’s up from 43% in 2006.

There is no evidence to suggest that the growth of health care costs, which have risen faster than GDP over the past four decades, is likely to slow significantly in the future. As a result, spending for Social Security, Medicare, and Medicaid will exert pressures on the budget that economic growth alone is unlikely to alleviate.

Just keep in mind that in 2007, people were not dying in the streets. What we are hearing now is the squealing that Jodi Ernst was talking about when describing her experience growing up on the farm.

1Just as much of a shock as Hillary losing.