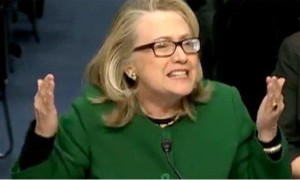 You have to hear then Senator Clinton in 2001 and in 2002, pressing for answers surrounding the first 9/11 attack. The one in 2001. Wanting to find out who was responsible for the deaths of Americans. And suggesting that, given all the warnings, the Bush administration could have done more and should have done more to prevent the attack.

My how things change from then to now, when Senate committee members tried to find out what happened in Benghazi before, during, and after the 9/11/2012 terrorist attack. Remember this?

“With all due respect, the fact is we had four dead Americans. Was it because of a protest or was it because of guys out for a walk one night decided to go kill some Americans? What difference at this point does it make?”

In investigating the first 9/11 terrorist attack, under Bush, Hillary said . . .

I cannot answer the questions that my constituents are asking. I cannot answer the concerns raised by the families of the victims. As agonizing as it is even to think that there was intelligence suggesting the possibility of the tragedy that occurred, particularly for the family members who lost their husband and their wife, their son their daughter, their niece their nephew, their mother their father. It is a subject that we are absolutely required to explore.

Listen to then Sen. Clinton at hearings in 2001 (the first 15 seconds) and 2002. Stunning, and, should amount to the end of her 2016 aspirations if it gets any play. Please share, because you know the mainstream media won’t dare bring it up.